An explosion occurred yesterday at the volcano on Hunga Ha’apai Island, about 65 kilometers north of Nuku’alofa, the capital of the island country Tonga. After the volcanic eruption heard in neighboring countries, a second eruption occurred in the region today. Big waves crashed ashore in Tonga.

“A 1.2 meter tsunami wave was observed in Nukualofa,” the Australian Bureau of Meteorology said in a statement. The maximum tsunami wave recorded after yesterday’s eruption was 30 centimeters.

The second explosion lasted at least eight minutes and spewed several kilometers of gas, ash and smoke into the air. Many residential areas in the region were flooded.

NOTICE TO THE LOCAL PUBLIC

Officials in Suva said the blast was intense and was heard more than 800 kilometers away in Fiji as “loud thunder sounds”, while residents of coastal areas were asked to steer higher.

In the post shared by AFAD on the subject, “While tsunami waves were formed after the violent volcanic eruption in Tonga in the Pacific Ocean, it was reported that some settlements were flooded. statements were included. 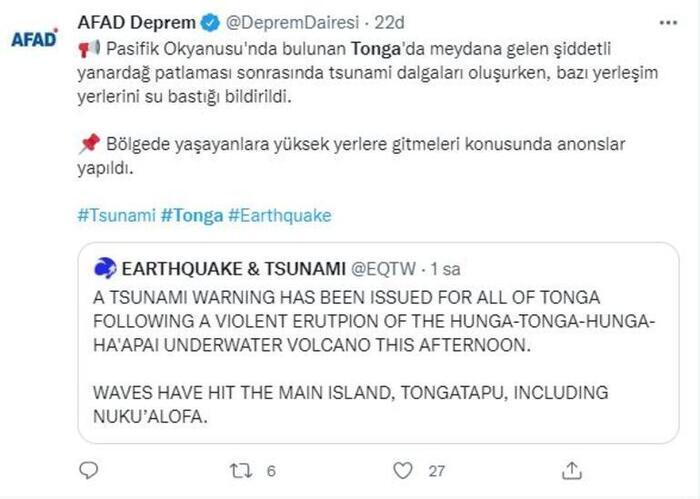 Taaniela Kula, head of the Tonga Geological Services, urged people to stay indoors, wear masks if outside, and shut down stormwater reservoirs and stormwater harvesting systems.

The Pacific Tsunami Warning Center issued a “tsunami warning”, citing the threat of sea level fluctuations and strong ocean currents that could pose a hazard to coastlines.

Retrospective: The Town With No Name is the worst adventure game in history - or is it the most amazing?

2 Myanmarese arrested in US for assassination attempt on UN Ambassador

Huawei P50 Pro uses Snapdragon because it runs out of Kirin Chip – Livik.net