The ancient Turkish homeland in the Black Sea: Crimea

“I longed for my homeland, O beautiful Crimea…”

Crimea is a peninsula in the south of the Sea of ​​Azov, north of the Black Sea.

The mountain range stretching from the southwest to the northeast and from the west to the east exceeds 1,500 meters in the parts where it rises the most. Some parts of it descend perpendicular to the sea, and behind the plateaus on the mountainous areas is the plain steppe.

Here is the history, exile and a few historical artifacts of the ancient Turkish homeland of Crimea, where its people yearn for homeland…

Frequented by visitors from Asia

These mountains also have rich water resources, and various rivers originate from here in the northwest and north directions. Former Crimean cities such as Bahçesaray, Akmescid and Karasubazar are located in the river basins on the northern slopes of these mountains.

Throughout history, Crimea has been a frequent destination for various tribes, especially those from Asia:

Various Turkish tribes settled in the mouths of the Kuban, Azov and Don rivers.

In the 13th century, Crimea’s economic ties with Anatolia were strengthened. There were many traders who came from Anatolia here.

A new era began when the Ottoman Empire took the Crimean Khanate under its protection.

The coasts stretching from Kerch to Balıklava on the peninsula were under the direct control of the Ottoman Empire, and the inner parts of this place belonged to the Crimean khans.

Cities and towns in both the Crimea and the part under the control of the Ottoman Empire developed over time, were equipped with historical artifacts, and these areas became Turkish-Islamic centers.

The former center of the Crimean khans was the former Crimea. This is a developed city; There were Sultan Baybars Mosque, Özbek Han Mosque, Hacı Mehmed Mosque, Hacı Ömer Mosque. Hans had many works built in Bahçesaray and Salacık.

Famous for its vineyards, Akmescit was the seat of the crown sultans. Gözleve on the west coast of the khanate was an important port.

The ancient Turkish homeland, the Crimea, entered the Russian Administration Period in 1783.

Acting with the aim of making Crimea a fully Russo-Slavic country, Russia saw it as a springboard in spreading south and did not want the presence of Muslim Crimean Tatars.

A systematic erasure of Turkish-Islamic traces in the Crimea dating back centuries was attempted. Many places have been renamed:

The naval base built on the former Crimean Tatar village of Akyar was also named “Sevastopol”.

The policy of oppression and extermination against the Crimean Tatars during the reign of the Russian Tsarina Catherine the Second was most bitterly repeated during the Soviet Union.

The Crimean Turks, who were lifted from their beds by the USSR soldiers on the night of 17 May to 18 May, were loaded into animal wagons.

Nearly 250 thousand Crimean Tatars were exiled to different parts of Central Asia and Siberia in 3 days.

Nearly half of those deported died.

Struggle for repatriation, illegal annexation in 2014

Russia illegally annexed Crimea in 2014. The Crimean Tatars were again subjected to the policy of repression, as it was during the reign of Catherine the Second and Stalin.

Thousands of Crimean Tatars had to leave the peninsula due to pressure from the Russian administration.

On the peninsula, raids and detentions on the homes, mosques and kindergartens of the Crimean Tatar people continue.

“The sea does not break apart. We are Turkish-Tatars.”

Cengiz Dağcı, who is the voice of the Crimean Turks in the Second World War, writes about all the hardships of the people in one of his novels:

“They call us Tatar, Circassian, Turkmen, Kazakh, Uzbek, Azer, Karakalpak, Bashkir, Kyrgyz. These are all lies! The sea will not break apart. We are Turk-Tatars.”

It is still possible to find traces of the Second World War in Crimea.

There are important monuments in the Crimea, which is rich in historical artifacts. Especially in the Seljuk and Ottoman periods, buildings such as mosques, madrasas, tombs, lodges, inns, fountains and bridges were built.

Some of the historical buildings that have survived until today are as follows:

Özbek Khan Mosque and Madrasa, Sultan Baybars Mosque, Zincirli Madrasa, Han Mosque in Gözleve, the Tomb of Hacı Giray, who is considered the founder of the Crimean Khanate…

The living glory of the Crimean Khanate “Khan Palace”

Han Palace, which is like a small but elegant replica of Topkapi Palace in the territory of Crimea, is a monument of Turkish-Islamic culture.

It was built by the Crimean Tatar Khan Mengli Giray in 1532 in the city of Bahçesaray and was used as the administrative center of the khanate at that time. 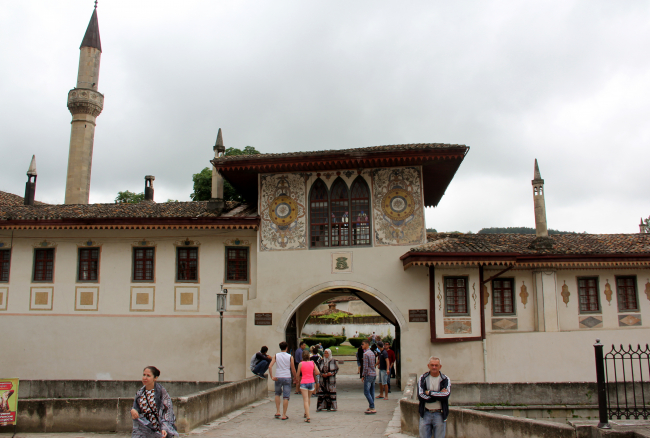 inside the Han Palace; There are structures such as Han Tomb, Han Mosque”, Divan Hall, Summer Arbor, Harem and Fountain of Tears.

The exact date of construction is unknown, and it is accepted that it was built by the Crimean Khan I. Devlet Giray in 1552.

Although the construction of the mosque is attributed to Mimar Sinan, it is not known whether he went to the Crimea.

The mosque in Gözleve, about 70 kilometers from Akmescit, resembles the Fatih Mosque in Istanbul with its 5 domes, one medium and the other small-sized, and 2 minarets.

Witnessing many historical events, the mosque is considered one of the most important witnesses of the suffering and persecution of the Crimean Turks.

When and what day is the Fed rate meeting? FED's December interest rate decision date is 2021!

Program of the week in basketball

When and what time are the numbers on 19 November 2021 on millipiyangoonline.com?