Internet Speed ​​from Various Countries, How about Indonesia?

Livik.net In the digital era, people are very dependent on the internet. Starting from getting information to shopping, can be done only by using a mobile device that is connected to the internet network.

The two types also have different speed levels, because of how they are used, and the cellular team has obtained the ranks of countries that have the highest internet speeds, based on data owned by speedtest.com., here are 10 countries listed as having Fixed Broadband Internet speeds: 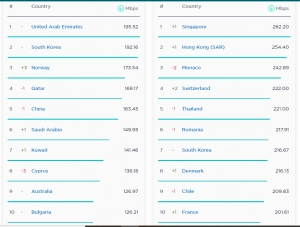 In connection with the 5G network that will be used in Indonesia, which has the possibility of affecting the level of Internet speed in the future, Kominfo is also working on Internet speed in Indonesia to reach 30Mbps. By building infrastructure on land and in the air. Because at this time also the use of Fiber optic networks which are used as transmission media. This cable can transmit light signals from one location to another with optimal speed.

Gendarmerie was introduced to primary school students in Izmit

Autumn festivities were held in Bahşılı

Those fleeing the checkpoint opened fire on the police

Historical artifacts were seized in the car in Akhisar